I reviewed David Quammen’s fascinating exploration of the discovery of “horizontal gene transfer” for the New Republic, and discuss its implication for so-called “three parent babies” conceived with DNA from three individuals.

Steffie Woolhandler, David Himmelstein, and I have a response to the Mercatus Center single-payer study, and the subsequent WaPo “fact check, up today at The Nation.

Not that anybody was asking for it, but I organized my healthcare writing in the last few years by topic for those new to healthcare activism looking for some background reading (obviously there’s much more out there from many others — maybe at some point I’ll put together an annotated bibliography of work I’ve found useful.

1. Single-Payer: What it is, why we need it, and why other reforms fall short

Gaffney A. Health Insurance Reform in the United States – What, How, and Why? Journal of Policy Analysis and Management 2018;37:188-95.

Gaffney A, Berger ZD.  The collapse of Trumpcare and the rise of single payer.  British Medical Journal Opinion, October 17, 2017.

“The Failure of Obamacare and a Revision of the Single-Payer Proposal after a Quarter-Century of Struggle,” with David Himmelstein and Steffie Woolhander, Healthcare Under the Knife: Moving Beyond Capitalism for Our Health, edited by Howard Waitzkin (Monthly Review Press, 2018).

“The West Virginia teachers’ strike is over. But the fight for healthcare isn’t,” Guardian, March 7, 2018.

“How Liberals Tried to Kill the Dream of Single-Payer,” New Republic, March 8, 2016.

“Trumpcare is like a vampire, set on sinking its teeth into the poor,” Guardian June 23, 2017.

“Trumpcare is dead. May it forever stay in its shallow grave,” Guardian March 27, 2017.

A two-part essay for LARB provides something of a survey of ideas about the relationships between health and inequality; the first focuses on class, the second on race:

a. “Is the Path to Racial Health Equity Paved with “Reparations”? The Politics of Health, Part II,” Los Angeles Review of Books, March 7, 2016 (review of Dayna Bowen Matthew’s Just Medicine and Damon Tweedy’s Black Man in a White Coat).

b. “The Politics of Health,” Los Angeles Review of Books, October 26, 2015 (review of Beyond Obamacare by James House).

“The Devastating Effects of Dental Inequality in America,” New Republic, May 25, 2017 (review of Mary Otto’s Teeth: The Story of Beauty, Inequality, and the Struggle for Oral Health in America).

4. Pharmaceutical Policy:  The BMJ paper provides an overview of the failings of the status quo together with a comprehensive proposal of how to fix it; the WaPo article gives the tl;dr on the proposal.

“How ADHD Was Sold,” New Republic, September 23, 2016 (review of ADHD Nation: Children, Doctors, Big Pharma, and the Making of an American Epidemic, by Alan Schwarz).

“The Dawn of Antidepressants,” New Republic, June 16, 2016 (review of Ordinarily Well: The Case for Antidepresssants by Peter Kramer).

To Heal Humankind: The Right to Health in History (New York, NY: Routledge, 2017).

6. Healthcare Abroad: I mostly write about healthcare in the US, but occasionally in the international context, with a special interest in the attack on universal healthcare in Europe.  The chapter below written with Carles Muntaner provides an overview of the effects on austerity for Spain, the UK, and Greece.

“Health and Austerity,” with Carles Muntaner, Healthcare Under the Knife: Moving Beyond Capitalism for Our Health, edited by Howard Waitzkin (Monthly Review Press, 2018).

Single-payer cost estimates are in the news this week.  A key issue in estimating the cost of single-payer is how it will increase healthcare utilization.  Increased utilization, it’s worth pointing out, is basically the only way that single-payer adds to overall healthcare spending.  Now some increase is clearly expected and desirable – after all, we’re providing insurance to the uninsured and eliminating copays and deductibles for the rest.  However, as David Himmelstein and Steffie Woolhandler and others have argued, there are supply limits – the system can only provide so much care.

In any event, utilization increases are typically presented as abstract figures.  For instance, the recently released Mercatus Center study estimates an 11.3% increase in utilization (for 2019), whereas the Urban Institute estimates a 16.9% increase (averaged over 2017-2026).

It’s helpful to put those percentages in the context of actual services provided, as Himmelstein and Woolhandler sometimes do, because they translate into a concrete increase in the number of doctors’ visits, nights in the hospital, ER visits, etc.  I offer some rough estimates of these changes below, with the assumption that the average increase in utilization affects all services equally.  So, for instance, using Urban Institute estimates, 16.6% more utilization translates into 185 million more visits to the doctor and nearly 4 million more therapeutic surgeries a year.

Are those numbers realistic?  For the moment I won’t editorialize on this, but it’s worth keeping these figures in mind as cost estimates of single-payer are released and debated in coming days.

* There were 990,808 doctor office visits in 2015 per NAMCS.  However, data on visits to hospital outpatient departments (OPD) has not been released by NAMCS since 2011.  In that year, OPD visits were 12.7% office visits.  I inflated the office visits figure by this percentage, assuming that the proportion had not changed.

I wrote a tl; dr on our drug proposal published last week in BMJ for PostEverything.

The proposal comes from the US/Canadian Pharmaceutical Working Group, a panel of physicians, scholars, and advocates from both nations that was convened by PNHP. It was launched this morning at a press release at the National Press Club, and was webcast. We were joined (via a recorded video message) by Representative Keith Ellison and Dr. Marcia Angell, former editor-in-chief of the New England Journal of Medicine. Steffie Woolhandler, co-founder of PNHP, moderated, and Sid Wolfe of Public Citizen, Ken Zinn of National Nurses United, and Alex Lawson of Social Security Works attended and spoke.  Video to follow!

I recently joined Andy Slavitt and Jon Favreau on Crooked Conversation for a discussion on the healthcare debate and the way forward to Medicare-for-All.

I wrote about the growing corporatization of healthcare in this piece in the Guardian, published Sunday.

I have a piece in the Guardian, up today, on the West Virginia teachers’ strike — and its implications for workers’ healthcare.

I have a point-counterpoint in the new issue of the Journal of Policy Analysis and Management, dealing with the question of what road we should be taking to get to universal coverage.

Dana Goldman, the Director of the Leonard D. Schaeffer Center for Health Policy and Economics at the University of Southern California, and Kip Hagopian, co-founder of Brentwood Associates and a Managing Partner at Apple Oaks Partners, LLC, make the case for a non-single-payer system of “universal coverage without breaking the bank.”  I argue (surprise surprise) why “Medicare-for-All” is the only potent, feasible path to universal coverage.  There are rebuttals from both sides and an editorial, all available free.

I reviewed Eli Cook’s new book, The Pricing of Progress.

I wrote about semiautomatic firearms in the Washington Post today.

I have a piece in the Washington Post today about why single-payer matters.

In an interview with Vox, Schatz revealed that he’s preparing a new bill that could grant more Americans the opportunity to enroll in Medicaid by giving states the option to offer a “buy-in” to the government program on Obamacare’s exchanges.

Today, Jeff and Dylan Scott published the opinions of seven health policy people on Schatz’s bill, including yours truly.

Fran Quigley wrote a thoughtful and generous review of To Heal Humankind for the Health and Human Rights journal. 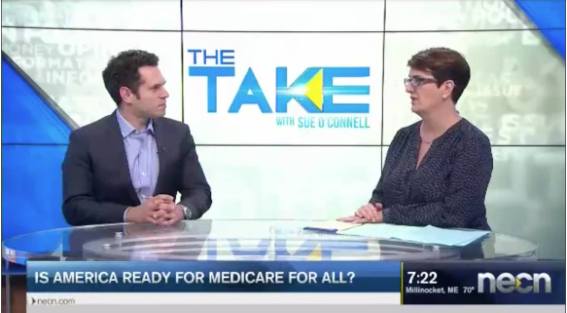 I wrote a rebuttal to Josh Holland’s piece in The Nation last week, as well as Paul Krugman’s Monday column, for Jacobin.

I was on the Majority Report yesterday discussing Trumpcare, Medicare-for-all, Josh Holland’s recent piece in The Nation, and more.

I was interviewed for a segment on The Takeaway that aired today on WNYC and elsewhere, on the Medicare-for-all fight.

I wrote about Charlie Gard for Washington Post’s PostEverything.